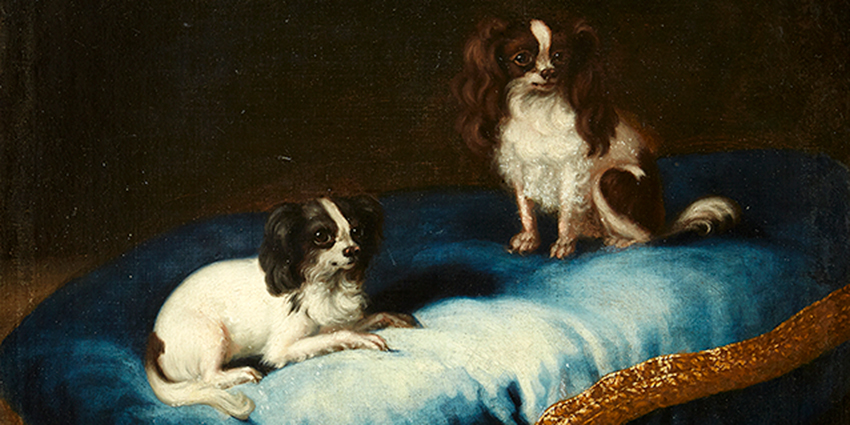 The dogs of Drottningholm

Nespelina, Don-Don and Turck are just three of the many dogs who have chased around Drottningholm's highly walkable park. Dogs have long played an important role in royal life. Queen Hedvig Eleonora and her son King Karl XI were so fond of their four-legged friends that they had them immortalised by the artist David Klöcker Ehrenstrahl. These portraits adorned the palace's galleries.

We do not know whether King Johan III's wife Katarina Jagellonica, after whom Drottningholm is named, owned any dogs. However, hunting – in which dogs played an important role – was a popular pastime at the Vasa Court. Queen Katarina's castle burned down in 1661, whereupon Queen Hedvig Eleonora soon built a new palace which is essentially what still stands to this day.

Painting animals was not common practice, but the entrepreneurial Klöcker did so for Queen Hedvig Eleonora and her son King Karl XI.

Raised to the nobility

In the early 1660s, Queen Hedvig Eleonora had made contact with the German painter David Klöcker. Klöcker had recently returned from Rome, where he learned to paint in the Roman Baroque style. However, many of the commissions he received involved painting animals. At that time there was a scale of values for artists' choice of motifs. At the top of the scale was depicting allegories or mythological themes, as well as portraits of famous people. Painting animals was not common practice, but the entrepreneurial Klöcker did so for Queen Hedvig Eleonora and her son King Karl XI. His work was appreciated by the royal family so much that he was raised to the nobility as David Klöcker Ehrenstrahl.

Portraits were painted of many of the royal family's dogs – you can see various paintings with small spaniels and pugs with names like Nespelina, Don-Don and Gredlinetta. The royal family moved around and also lived at other palaces, including Ulriksdal where the spaniel Courtesan is buried in the palace park. A short farewell poem was written for Courtesan's funeral by the court poet Erik Lindschöld. King Karl XI had a greyhound, Griep, who probably got his name due to his retrieving skills. Fortun was a setter-type herding dog with elements of collie. Turck was a much-loved large white hunting dog with brown spots. On this dog's portrait you can see a collar with a golden monogram: CRS – Carolus Rex Sueciae.

King Karl XI's horses, which according to sources were his dearest friends, were also depicted in large full-height portraits measuring no less than 270 x 250 cm. Many of these animal portraits were hung in the galleries at Drottningholm.

Lovisa Ulrika, who married Adolf Fredrik in 1744, owned small pugs, but there are no known depictions of these dogs and they are therefore less prominent in history.

According to the 1736 inventory, there were 23 horse portraits, for example, of which 20 were hung in the orangery. When the Nationalmuseum took over the collection in 1866, some of the paintings from Drottningholm were moved and distributed between Strömsholm Palace and Gripsholm Castle.

Lovisa Ulrika, who married Adolf Fredrik in 1744, owned small pugs, but there are no known depictions of these dogs and they are therefore less prominent in history. Their son Gustav (III) and his siblings grew up with dogs. Carl Gustav Tessin, who was Crown Prince Gustav's teacher for a while, is said to have guided his pupil around the galleries at Drottningholm where, as mentioned, many of Ehrenstrahl's animal portraits hung.

When King Gustav III took over Drottningholm Palace in 1777, he commissioned Carl Magnus Piper to build an English park. Unlike a baroque park, an English park is less symmetrical and more landscaped so that visitors can discover things and perhaps even be surprised when walking around. These walks could also involve riding horses and small carriages along the landscaped paths. An English park is just as planned as a baroque park, but features lines of sight from one location to another. Visitors should be able to stand somewhere and look towards something they are interested in investigating more closely, perhaps a Gothic tower or a building that looks like an ancient temple. There are many of these follies (from the French for 'vanity') in Drottningholm Park.

The island is now informally known as the dog island, because dogs are allowed to run free here.

The park is also home to a system of ponds and islands, which were designed to create a marshland. The marshland was transformed into a popular walking area, where visitors could see seabirds. A swan house was built on the island of Svanholmen for the park's swans to live in during the winter.

On another of the islands, Ormholmen, other animals have been made welcome in recent years. The island is now informally known as the dog island, because dogs are allowed to run free here. Two gated bridges lead to the island. On the island, the natural demarcation provides a great sense of freedom for both dogs and humans. On rainy days, a pavilion provides shelter for dogs and their owners. The pavilion is topped with a weathervane in the form of a dog, modelled on the King's own dog Brandie. 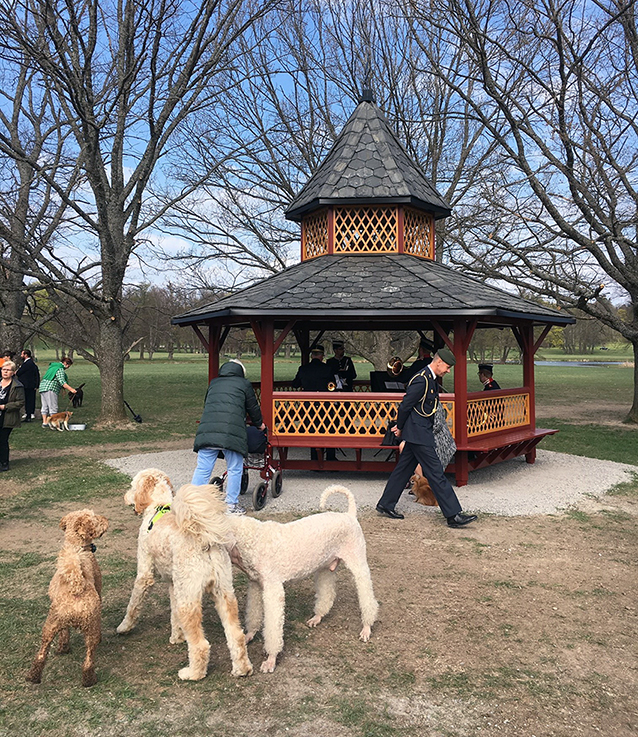 Ormholmen in the English Park at Drottningholm is now informally known as the dog island, because dogs are allowed to run free here. Photo: Ida Setfors 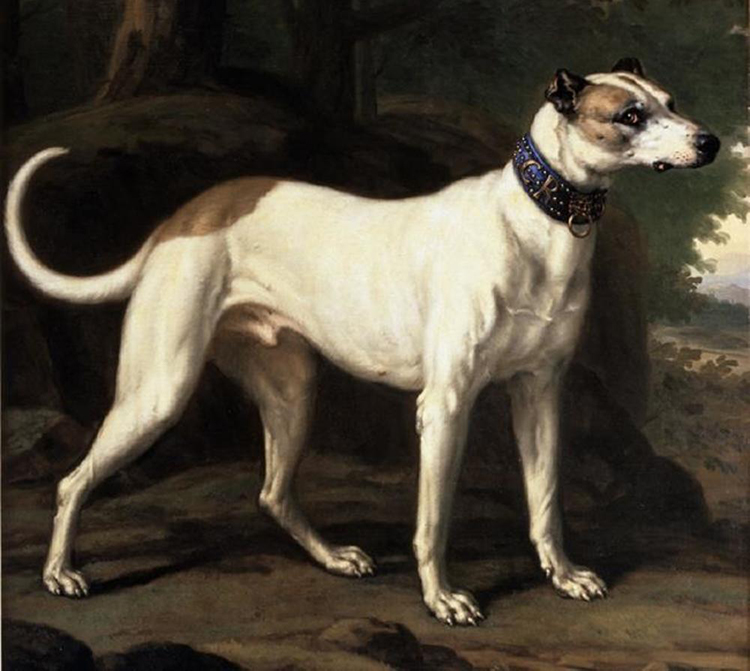 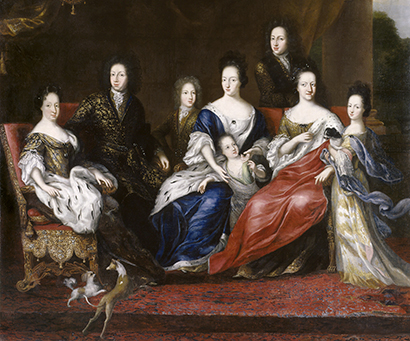 King Karl XI with his family, of which dogs were a natural part. Painting by David Klöcker Ehrenstrahl. 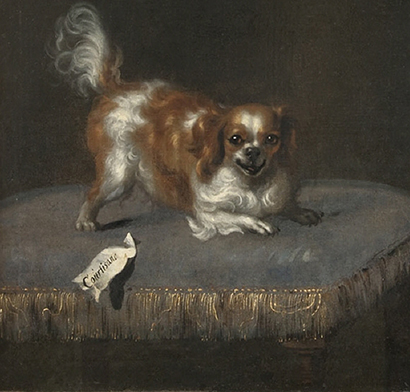 The horse Kortom, painted by David Klöcker Ehrenstrahl. The Latin inscription on the portrait reads: "This is King Karl XI's loyal riding horse [...] painted in the thirtieth year of his life and the 84th year of the century. This dumb beast had few qualities that were unlike those of a human intellect." Today, the painting hangs at Strömsholm Palace. Photo: Nationalmuseum 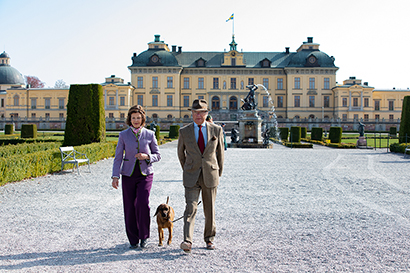 The King and Queen with their Bavarian Mountain Hound Brandie outside Drottningholm Palace. Photo: Sara Friberg/The Royal Court of Sweden