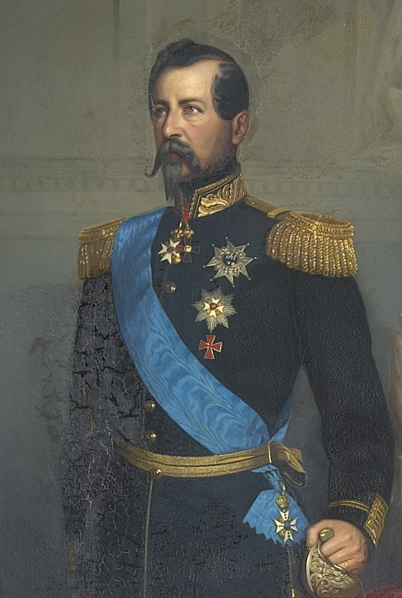 The painting hangs in the Royal Palace of Stockholm, and depicts Oskar I standing in front of Queen Kristina's silver throne. This statesmanlike depiction of the king in uniform emphasises his position as head of the kingdom.

The royal crowns of Sweden and Norway lie on the table beside him. When the portrait was painted, King Oskar I would only live for three more years.

The original, painted by Carl Theodor Staaff (1816-1880), is kept at Drottningholm Palace. The image shows a copy painted for the Royal Palace of Stockholm by the artist Arvid Julius Gottfried Virgin. Virgin trained at the Royal Academy of Fine Arts alongside the original artist.

The portrait can be seen in the Bernadotte Apartments at the Royal Palace of Stockholm.

The original by Carl Theodor Staaff hangs in the Hall of State at Drottningholm Palace.