The palace gets its name from one of the personalities of medieval Sweden, Bo Jonsson Grip, by whom the first Castle was built in the second half of the 14th century.

Towards the end of the Middle Ages, the Castle was donated to a Cartesian Monastery founded in Pax Marie - the Latin name for Mariefred.

The monastery was sequestrated by the State at the Re-formation, and the Castle began to be built in 1537 under the direction of the master-builder Henrik von Köllen.

This was Gustav Vasa's project, as part of a new system of national defences. The Castle was also intended as a fitting residence for a Renaissance ruler – Gustav Vasa.

The large Hall of State with its painted roof and its full-length portraits of Gustav Vasa and contemporary crowned heads of Europe conveys, although many times restored, a good picture of the original Gripsholm scene.

The most famous of the 16th century apartments is Duke Karl's Chamber, which is one of the best-preserved interiors of the period anywhere in Sweden.

Hedvig Eleonora made considerable changes and additions, among them the Queen's Wing.

The reign of Gustav III in the late 18th century marked a new period of brilliance in the Castle's history. It was at this time that the exquisite theatre was fitted out in one of the round Renaissance towers of the Castle.

This is one of the best-preserved 18th century theatres in Europe.

During the 19th century, Gripsholm evoked strong national sentiments and the Castle came to be regarded as a national monument.

Furniture and art objects of great historic importance were transferred from the various royal residences to Gripsholm to reinforce its national character.

A much debated restoration of the Castle took place at the end of the 19th century. Critics described it as an attempt to make the Castle even older than it was.

Gripsholm today is a sampler of Swedish interior design from the 16th to the late 19th century, a unique collection of furniture and decorative arts from 400 years. 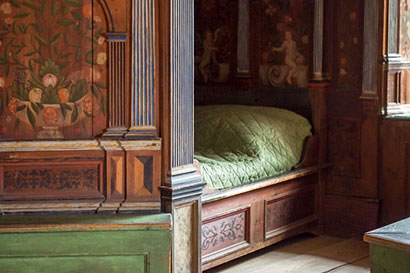 Duke Karl's Chamber. The room was decorated in the 1570s as a bed chamber for Duke Karl (IX), and remains almost untouched since his time with its carved, ornately painted wooden panelling, plastered surfaces with painted floral garlands, built-in bed and benches affixed to the wall. Photo: Kate Gabor/Royalpalaces.se 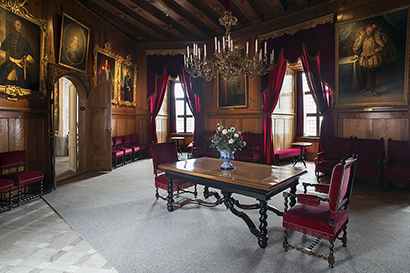 The Audience Chamber. The appearance of the room dates from just before 1850, during the time of King Oskar I, when Gripsholm Castle was first decorated in historical style. The portraits in the room depict a series of Swedish monarchs, from King Gustav Vasa to King Oskar I. Photo: Sanna Argus Tirén/Royalpalaces.se 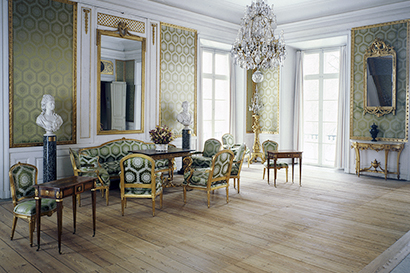 The Green Salon. The room was decorated in around 1780 for Queen Sofia Magdalena, when her entire four-room apartment was prepared at Gripsholm Castle. This proved a popular room for the royal court – people came here to converse, read aloud, sew and embroider. Photo: Sven Nilsson 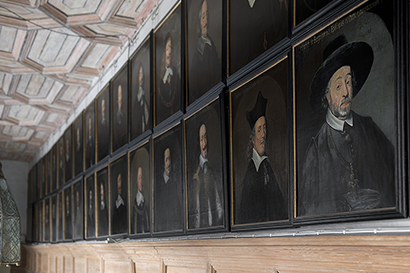 The Westphalian Gallery. The room is named after the 70 or so portraits of delegates who participated in peace negotiations in the 1640s. The negotiations resulted in the Peace of Westphalia in 1648, bringing thirty years of war to an end. Photo: Lisa Raihle Rehbäck/Royalpalaces.se

You can walk around Gripsholm Castle by yourself, but taking a guided tour can make your visit extra special.

Autumn at the Royal sites

This autumn, you can explore four of the royal sites with self-guided visits and guided tours: The Royal Palace, Drottningholm Palace, Gr...

See the programme for this summer's Music at Gripsholm series of concerts. Discover classical music, opera and choral works as leading mu...

The model of the 2021 Portrait of Honour is Carl Bildt, a politician and former prime minister of Sweden. The portrait has been painted b...