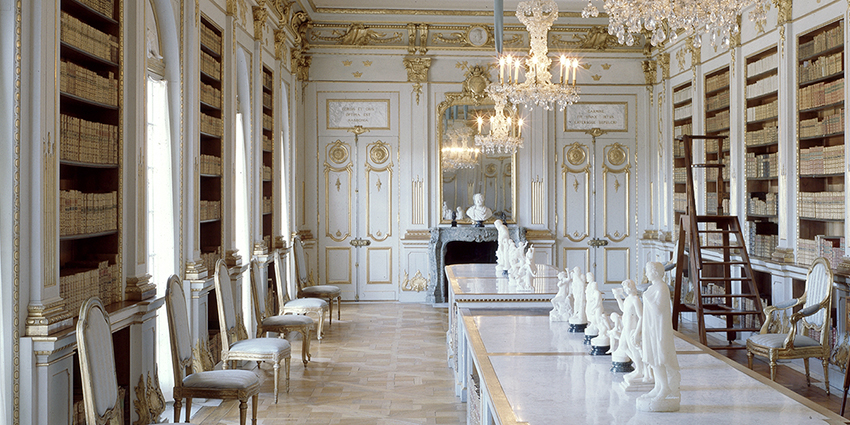 Two queens have left their mark on Drottningholm Palace. One of them, Queen Hedvig Eleonora, had the palace built. The other, Queen Lovisa Ulrika, brought the palace into the modern age.

In August 1744, Princess Lovisa Ulrika came to Sweden to marry Prince Adolf Fredrik. A few days later, she received Drottningholm Palace as a wedding present. Lovisa Ulrika was pleased, but was hardly overwhelmed. After all, she was a member of the high-status Prussian royal family, and her brother was King Frederick the Great.

She immediately undertook the task of modernising the palace’s dark, heavy Baroque interiors. Above all, she wanted a proper library. The magnificent library was created by Jean Eric Rehn. It retains some Rococo elements, but the room also has a distinctly austere character. This might be one of Sweden’s earliest Classicist interiors. The room is decorated entirely in white and gold, with rich carved wood ornamentation. The book shelves are made from cedarwood to keep vermin away from the expensive books, and in the centre there stands a long marble-topped library table, at which a reader can either stand or sit.

she had “more knowledge of, and insight into, the sciences than a lady needs”

Many libraries have been created in stately settings, sometimes mainly for show. However, there is no doubt that Lovisa Ulrika was a keen reader. She knew German, French, Latin, Italian and English, and she also learnt Swedish. Her interests included architecture, history, art, drama, geography, mathematics, philosophy and biology. In 1772, Marshal of the Court Hans Gustaf von Rålamb wrote that she had “more knowledge of, and insight into, the sciences than a lady needs”. However, her ambitions extended far beyond simply being a lady. She wanted to be as educated a ruler as her widely admired brother.

Her library includes plays, maps, travel journals and books about mathematics, history, science and architecture. Here, The Iliad sits alongside Flora Danica and Rousseau’s Émile. There are also many works by Voltaire, with whom Lovisa Ulrika corresponded. The spectacular library became a meeting place for contemporary intellectuals, but Queen Lovisa Ulrika was particularly drawn to the naturalist Carl Linnaeus. He awakened her interest in the natural sciences and helped her to catalogue her extensive collection of butterflies, plants, shells and books. 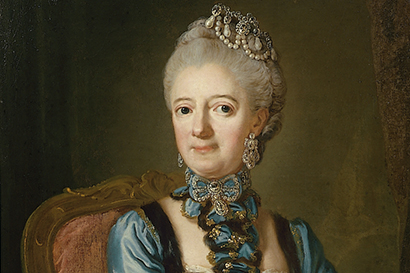 She had “more knowledge of, and insight into, the sciences than a lady needs”. However, Queen Lovisa Ulrika's (1720-1782) ambitions extended far beyond simply being a lady. She wanted to be as educated a ruler. Oilpainting by Lorens Pasch the younger. 1768.